In rural situations there can be obstacles or characteristics of the natural terrain that may create an unfriendly environment for propagating low-power radio signals from our beam communicator to the base receiver. Hills and outcrops of land being the number one issue, particularly if the hill is relatively close to either the gate communicator or the base receiver. Other things to contend with are sheds, dense bush and hedges.

A radio signal from one of our beam-sets can potentially travel several kilometres over say flat farmland in an almost line-of-sight (LOS) situation. However this may be reduced to less than two-hundred metres when impeded by any combination of the above factors. Wet bush after heavy rainfall will cause some signal to be absorbed as well.

At the receiving end, multiple walls and certain kinds of building materials will play their part in weakening the signal too, and on some properties there may be very little left of the signal by the time it reaches a receiving device located in your client’s house.

Radio authorities and solar panel size constraints both restrict the amount of power we can use to ‘blast’ the signal to its destination, and as a result we have developed smart solutions to overcome connectivity challenges of the kinds described.

Parabeam® is the first product of its kind to use two-way connectivity. This means signals are sent in both directions between a beam-set and a receiver. An almost instant return signal is a confirmation that everything worked OK. Should the beam-set fail to receive its confirmation it will try sending the signal again – up to three more times. Two-way connectivity is a built-in feature that is a first line of defence in borderline situations.

When a signal repeater is deployed it acts as a go-between, carrying both alert and confirmation signals backwards and forwards in bucket-brigade fashion.

It’s well known that an ‘outside aerial’ improves TV reception enormously, compared to a set-top antenna – this is due to a combination of elevation (being on the roof of a home) and the use of a correctly designed, tuned and directional antenna system.

Our design team have developed an outdoor antenna that makes a big difference to a ‘borderline’ signal, boosting connectivity by 5-7 times in many situations. It is common to achieve 2-3kms range using this antenna. Previously the antenna was only available for installation at the receiving end and in most cases that would mean mounting it on the roof of the client’s house.

Recently we have designed a special version of the antenna allowing it to be mounted at the beam-set end instead of the base receiver end – making installation far simpler.
The Diagrams A and B (next page) show how greatly the signal strength can be improved by installing a boost antenna on a site where a small but close outcrop of land impedes the signal from the nearby beam-set before greatly dropping away to a plateau where the house is situated.

Antennas may of course be installed at both the beam-set end as well as at the receiving end to increase the range even more dramatically.
If an antenna located at the beam-set is preferred, a compatible ‘beam communicator’ must be ordered along with the antenna – the antenna can’t be added to a standard beam communicator later because the required connector is not fitted.

This version of the antenna comes with a 6 metre long RG58AU coaxial fly-lead fitted with UHF connectors at either end. The length is deemed ample for the majority of situations and allows the antenna to be installed well above ground level if needed. Any longer and cable losses would begin to subtract from the gain of the antenna.

Overall the resultant signal is 10dB stronger without including the significant advantages achieved from elevating the antenna.

These antennas may also be used in conjunction with signal repeaters (described next) for use on sites where standard equipment and even boost antennas would not have stood a chance. 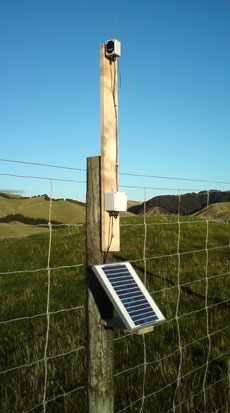 There are sites that are so challenging that boost antennas alone will not get the signal over a hill or large outcrop of land. Our design team again have developed a solution for this scenario; signal repeaters.

The site shown in the image below had a problem with a large outcrop of land (not easily discerned from the Google Earth image) as well as a large shed preventing much useable signal from reaching the house from the from gate. In this situation there was no need for boost antennas because a signal repeater was installed on a nearby ridge and there was good line of sight from the beam-set to the top of the ridge, and from the top of the hill across to the house.

For example; one beam-set may on the other side of a hill and require a repeater while another beam-set is close enough to talk to the receiver directly. This configuration can be set up before the system leaves our factory but may be changed relatively easily later. 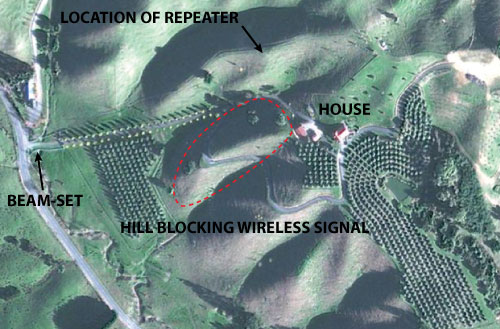