Our Gate Alarm Is Erratic – Any Suggestions Why?

A majority of products sold as a ‘driveway alert system’ or ‘gate alarm’ for use outdoors, incorporate a common type of motion sensor that is not fit for the purpose.   The sensor, known as a PIR, is only reliable indoors where the environment is more controlled.   However they work fine with things like motion activated lights, where it is less of a problem if they switch on occasionally from a false positive.

A PIR based gate alarm will interpret many environmental effects as an intruder, often getting its owner out of bed for no good reason.   It is clearly important that the sensing technology used in a gate alarm is robust and false-alarm free. 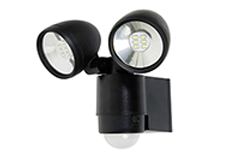 The PIR device detects the heat signature from a warm person or animal, or from the motor or tail-pipe of a vehicle.   When the object passes a Fresnel lens array against a backdrop of cooler air, it creates a fluctuating voltage and this is interpreted as movement.   Target objects may be people and vehicles, but in reality all it takes to activate a PIR sensor are alternating currents of warm and cool air, or a tree branch waving in a breeze.

Other factors compound the problem further.   To work properly the PIR relies on an air temperature Goldilocks zone – not too cold and not too hot.  If the temperature is outside the Goldilocks zone, two things can happen.   In cold weather the PIR picks up objects much further out from the sensor, such as animals roaming in a nearby paddock.   In hot weather the PIR sensor may not detect much at all because the high ambient air temperature masks everything else.

Some manufacturers have tried to minimise these effects by combining multiple PIR elements into one device to augment performance, but this approach is not enough to adequately improve the PIR for use outdoors.

Others have included a microwave Doppler sensor (a variation of the kind used in radar-based speed cameras) with a PIR to give additional verification before activating.   Again, an improvement but increased power requirements makes them impractical for solar or battery power, therefore this kind is typically hard-wired back to a power source.

What is the best outdoor detection technology?

From its inception in 2003, Parabeam® has never considered using PIR technology and instead uses far superior Active Infra-red beam technology.  Two beam-units face each-other forming a beam between them.   This approach is not affected by temperature or rain and requires a solid, real object to interrupt the detection beam before activating.