Parabeam® Standard | Our most popular model

Our middle-ranged system for rural and commercial sites 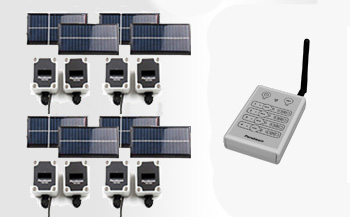 Parabeam® STANDARD is a high performance wireless driveway alarm that gives an “early warning” alert in your home whenever a visitor passes through its detection beam. It uses a proper point-to-point beam, making it far more immune to false alarms than PIR based systems. Never miss a customer or intruder again. The beam-set may be installed as a driveway alarm, or over a much wider span (up to 35m) to protect the likes of implement sheds or fuel tanks.

Wireless range between the Beam-set and indoor Base Receiver is typically 300m through a number of obstacles such as several house walls, trees and a small shed (for example). However, If your property has dense native bush or “earth” blocking the radio signal path, we suggest our XR-2500 model. Please refer to these reference guides.

The Parabeam® 700-FSK receiver sounds an audible alert whenever any enrolled beam-set is activated. It supports up to 4 beam-sets and has adjustable beep volume. The alert “beeping sequence” differs depending on the zone that has been activated, and you can “mute” any zone(s) that you do not want to monitor at the time. External devices (such as an alarm panel, 4G unit or strobe lights) can be interfaced with the Base Receiver via a 10-way terminal block located on the rear panel of the enclosure, these devices can also be switched on and off using the same “mute” buttons. At a glance you can see which zones have their beeping muted and which zones have the external device connected to them deactivated.
An example of this function: You have a 4G text messaging device connected to the Base Receiver and you want zone 1 beeping but not texting and every other zone texting but not beeping (muted). This can be set up within about 5 seconds by simple button presses.

The beam-set is made up of two small Beam Units, installed directly opposite each other. An infra-red beam is transmitted from one and received by the other. Whenever the beam is interrupted for a minimum time by a solid object, one beam-unit sends a wireless signal to the Base Receiver, alerting to the arrival of a person or vehicle. Click here to see a graphic of how the system works.
The Beam-set is powered by internal rechargeable batteries which are kept charged via small mountable solar panels.

The solar panels are rated to keep the beam units charged no matter how many days, weeks or months of gloomy weather, providing there is not a canopy of shade above the panel. They also have a protective polycarbonate coating that extends their lifespan under the harsh NZ sun. (There is a very thin extra layer of plastic over the top of the polycarbonate which does weather, however the real protection is the polycarbonate beneath) Solar panel cable lengths are 5m and may be customized to any length up to 50m. Occasionally a customer may need an extra 5-10m to get clear of a tree.