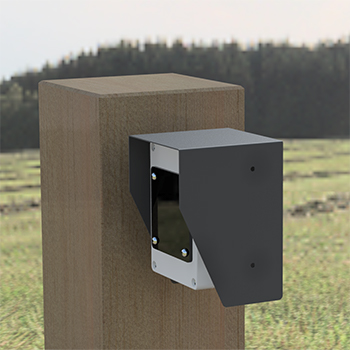 Parabeam® PRO beam-sets project a powerful detection beam over a distance of more than 300m, allowing intruders to be detected entering property boundaries or wandering around large outdoor sites such as a construction-sites.

Up to 4 beam-sets may be monitored to one base receiver (which would typically be located in your home to provide an audible alert) and you can mix smaller beams with PRO beams if you only need a shorter beam in some locations. (our smaller beams cover 35m maximum)

PRO beam-sets are solar-battery powered (no costly cabling) and only require a relatively small solar panel connected to each beam-unit to maintain full battery charge year-round.

We also offer a battery-only version of the PRO beam-sets for rapid-deployment on construction sites, large outdoor venues or for temporary or constantly changing situations.

If you need notifications whenever you are away from your home, you can connect a text messaging (SMS) module to the base receiver. This works on 3G and 4G and will text any kind of phone. (no IT expertise needed and the modules are sent “plug and play”)

The base receiver can also be used to drive “police” strobe lights which have proven to be a powerful psychological deterrent to intruders. Some farmers prefer to operate floodlights, which is of course also possible. Generally this would require a second base receiver in the building the floodlights are mounted on, along with a daylight sensor or 24-hour timer.

If you are an electronic security integrator you will be pleased to know the base receiver has 4 separate zone outputs for interfacing with alarm panels. (you will require a 4-relay board to provide dry contacts for EOL resistors)

A note about range …

Parabeam® PRO systems are manufactured in two wireless protocols, one is for medium-short range applications (FSK protocol) and the other is for longer range (XR-LoRa protocol) Please refer to these reference guides to see what version you may require.

A gain antenna may be connected to PRO beam-sets whenever more range is needed than is indicated on the product reference guides, or when the site presents challenges unfavourably affecting range such as dense native bush or a hill. In these cases the XR-LoRa protocol should be be selected so you have the most powerful hardware to begin with. An antenna would be more commonly deployed at the base receiver rather than a specific beam-set so that range is universally boosted.

How the detection beam works …

The image below shows how the projected IR beam has a divergence angle that ensures the receiving beam-unit (called the “Beam-communicator”) is always “seeing the projected spot” unless poorly aligned. Some movement is tolerated because of the beam divergence. In reality the cone-shaped beam does not have a sharply defined boundary – the beam gradually weakens radially outward from the centre until it is too weak to be received. 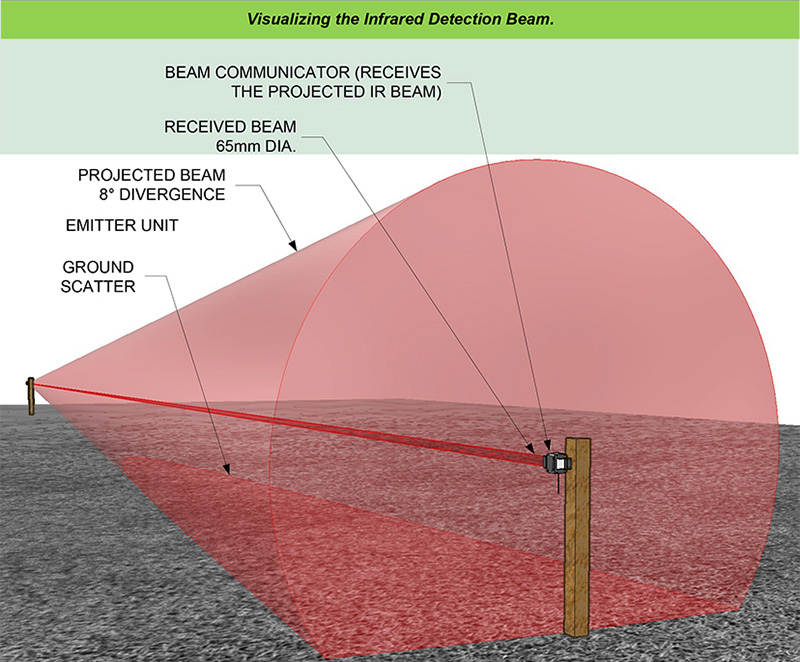 (1) Flat ground.
PRO beam-sets work reliably over flat ground. Undulating ground can create detection anomalies where the detection beam is either too high, or too low to the ground.

(2) Rigid Mounting
If the beam-sets are going to be installed in the same location for a long time, we recommend mounting them on a solid fence, wall or on quality hardwood or laminated ply post such as Prolam so they remain aligned indefinitely.

(3) Mounting height
Beam-sets should be mounted between 1000-1200mm above ground (900mm minimum) to minimise “ground scatter”.

Look inside the PRO beam-set …

This document shows the internal layout and electronics inside the PRO beam enclosures. What is not shown is the lens assembly which is the secret to its 300m detection beam distance. Download Internal layout diagram Click to Download