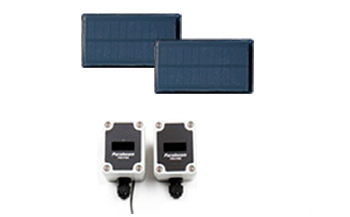 Parabeam® Lite is a high performance wireless gate alarm that sounds an alert in your home whenever a visitor drives or walks through its detection beam. It uses a proper photo-electric beam, making it more immune to false alarms than PIR based systems. Never miss a customer or intruder again.

Parabeam® is hand assembled in New Zealand and designed to operate in sub-zero temperatures as reliably as the penetrating heat of the Australian outback.

The beam-set may be installed as a home ‘driveway alarm’ or across wider areas, protecting fuel storage tanks and implement sheds for example.

The detection beam itself can span up to 35m of open ground. Wireless operating range between the Beam-set and Base Receiver is typically between 50-80m.

Two-way Radio Supervision and On-board Diagnostics (displayed on Base Receiver) are features alarm installers routinely expect on wireless equipment – we haven’t seen these appear on any other gate alarm yet.

The Parabeam® 700-FSK Lite Beam-set is designed to monitor driveways or open ground with its precise invisible infra-red beam.

The beam-set is made up of two small Beam Units, installed directly opposite each other.  An infra-red beam is transmitted from one and received by the other.  Whenever the beam is broken, one Beam Unit sends an RF signal to the Base Receiver, alerting to the arrival of a person or vehicle.

The Beam-set is powered by internal rechargeable batteries which are kept charged via small mountable solar panels.

Each Beam-set comes with two solar panels.  These solar panels are designed to keep the Beam-set batteries charged.

Our solar panels have been treated, specifically, to withstand salt spray and harsh UV rays which New Zealand experiences due to the depletion of the ozone layer.